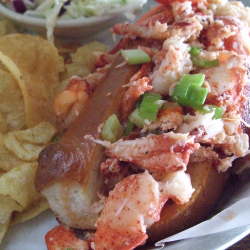 At Sam's the charcuterie, including cured salmon, is house-made, as are the dressings, pasta and sauces. Lobster clambakes are available for private parties with optional margarita and raw oyster bars, but there's also a "Party in a Pot"—a lobster clambake you can cook at home. The kids menu offers organic soft-serve ice cream, and follows the "Kids Healthy Choices" program.

The parking lots were full for a Sunday lunch, and despite the chill of overcast skies, jacketed patrons enjoyed live music on the deck. Without reservations we felt lucky to snag the last tall table in the tightly-packed bar. As a warm-up, the cup of rich New England Clam Chowder ($6.25) was actually a good-sized bowl, and wonderfully flavored with plenty of smoky bacon.

Four Blue Crab Cakes ($12.50), like golden golf balls with a crisp crust were moist in the middle; just crab with bits of celery, onion and herbs. On the side was a little salad of red and yellow bell peppers with fennel and cucumber in light vinaigrette.

The Beet Salad ($8.95) featured bitter greens and frilly frisée chicory topped with a large quartered strawberry, soft crumbles of feta cheese, and chilled cubes of saccharine golden beets. The outstanding dressing was based on a purée of roasted pistachios.

Phil Lempert, food editor of NBC's Today Show named Sam's Lobster Roll ($19.95) one of the five best sandwiches in America. Instead of a traditional hot dog roll, Sam's bread has a lovely fluffy texture reminiscent of brioche. Toasted and buttered, it was overflowing with large chunks of sweet lobster claw.

Desserts, too, are house-made, and Sam's Key Lime Pie ($7) is a local favorite. The sugary graham cracker crust was filled with rich, thick and tart custard the color of flan and topped with fluffy sweetened egg white meringue, lime slices, and powdered sugar.